Have you ever discovered something so extraordinary and surprising that you were like “OMG THE WORLD NEEDS TO KNOW” ?

Anyone having seen an episode of My Little Pony knows better than to judge by appearances, and anyone having read Homestuck knows that a dorky guy in his room can hide so much more…  Today I want to introduce Hatoful Boyfriend and try to explain without spoilers why it’s a pretty amazing example of what Visual Novel can offer as a medium and goes way beyond what you expect.

Ok little recap, Hatoful Boyfriend is a Japanese dating game where you play as the only human girl in a school for gifted pigeons and get to chose which… bird you wanna hang out with and date? You’d think it says it all, right?

Much like everybirdy else, my expectations getting into this were to have a good laugh over ridiculous bestiality… Well I couldn’t have been more wrong. I did laugh a lot (though there is no bestiality) but that was only the tip of the iceberg. In a similar way to when I went to see Book of Mormon expecting a show making fun of Mormons by depicting them as ridiculous, I was about to discover something unexpectedly deeper (though less philosophical). Of course if you read this you will be less surprised by the game, but I’ll keep this spoiler-free.

Japanese visual novels are, if you will, interactive illustrated books which offer the reader a choice every now and there. Based on these answers, the story follows a different line (route) and leads to a different ending (and, usually, a different pairing partner). In a way, this genre leverages the interactivity offered by technology to shift from a purely linear narrative (books) to a complex multi-layered depiction of an ensemble of alternate realities. And Hatoful Boyfriend is a stunning example of the mastering of this at form. 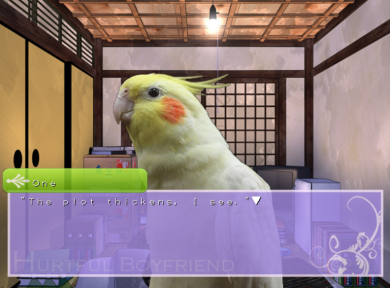 If that is not enough to convince you, I feel obligated to point out that the game is full of very cool references, and it contains amazing pieces of meta reflections and real-world integration, putting it at the cutting edge of transmedia experiences. Furthermore, it’s rather short (I’d say something like 5-8 hours) so you have no excuse.

I was far from prepared for such a rich and diverse story, playing with my expectations as well as with my emotions and its own medium. It went in a few hours in my mind from a joke to a truly impressive piece of art. It’s impressive how well each route gets their own genre and emotion tonality, and how the information you learn on your journey through these alternative stories will totally change the game. It will remain in my memory as an stunning example of what Visual Novels can achieve. I can’t recommend it too highly, especially since it will be released on Steam in August.

One thought on “dont judge a visual bird by its cover”