You’re all witness and actors of the largest  ever contemporary postmodern art work/experiment. I do have many issues with the Star Wars franchise, more than I can count actually, and it really pains me to do an article on it, especially under the circumstances, and even more so to praise its glory, but I would be remiss considering my passion for post modern art if I let you guys miss out on something so huge and elegant. I cannot in good conscience not point it out for you.

My issues with Star Wars start as early as episode 4. The whole movie is riddled with plot holes and inconsistencies, biggest of which being the fact that a massive technologically advanced space empire would undertake something so huge as building a planet-sized weapon and leaving a literal hole in it. Straight to the center. And though I have to admit it’s somewhat elegant to have a movie centered around a gigantic plot hole that is actually a giant hole, there are many things with it that do not make sense.
But you know me, I’m a tireless optimist, always trying to shoot for the best and trying to see the best in everything around me, though sometimes it’s really really hard. I just couldn’t accept the success of something so inconsistent among my peers. And then it hit me. Star Wars – A New Hope was actually a societal criticism of overcomplex bureaucracy, which would lead to flaws this outreagous in projects this big. It would mirror the countless project fails from the real world, as an illustrative cautionary tale.

The cliche characters and repetitive catch phrases would now make sense if you look at the movie through the lense of societal criticism. It becomes a somewhat efficient kid-targeted sarcastic parody (postmodern deconstruction can save anything). It even soothes the outreageousness of the plot of 5 and 6 being “let’s do 4 all over again”. Cause mankind never learns, be it IRL or in a galaxy far far away. Semper eadem sed aliter.
Now I know what you’re thinking, Georges Lucas may not have intended for this interpretation. But even if art/beauty/meaning is clearly in the eye of the beholder, and the paternity of a work of art can lead to so many debates, I think you’re not giving the guy enough credit. He recognizes and advocates the parallels within the… let’s call that a plot. And let’s not forget that he wanted to move on to episodes 1,2 and 3.

Now more experienced, he could move on to wiser and more subtle societal considerations, which is clearly what the prequels are all about. Anakin’s story arc is a deconstruction of the nauseating manicheism that plagues the original trilogy. Right and wrong are really blurried now. Anakin ends up on the “Dark Side” while purseuing seemingly noble interests (love, passion…). The goodies are sometimes stubborn fools clinging to inconsistent imperialistic values.

The irony of “only sith deals in absolute” is no accident. Lucas goes a long way into the deconstruction of the original trilogy to highlight that the world is nowhere as simple, thereby offering a very elegant meta-criticism of its former simplistic work. The light is now on how society erroneously builds up manichean arbitrary distinctions, through many media including movies like the original trilogy, and idolizes them to power conflict.

On a less meta note, this is litteraly what the prequels are all about. The plot is centered around the manipulations of Palpatine to create tensions all around the galaxy so that in the midst of the chaos the people would ask for and welcome with open arms a totalitarian regime imposing order. The parallel to real world dictatures is not even hidden, considering how Hitler’s rise to power is the result of democratic elections. The prequels culminate in this amazingly elegant phrasing: “so this is how liberty dies, with thunderous applause”.

Mankind is its own worst enemy, asking for its own leash/destruction. The prequels are a classic cautionary tale about how man, left to themselves, will so easily follow a trend and descend into hatred, extremism and annihilation. It warns us about the worst sides of mankind, about the dangers of brainless following and manichean demonization in a very cute and meta way.

And so people thought it was over and continued to praise the worst movies of Lucas career entirely unaware ot the gigantic irony they were partaking in, doing the very thing the work (by no means unflawed) was warning against. And the world seemed to have reached some kind of peaceful status-quo going on as it always had, moved mainly by the terrific inertia if mankind. But then Lucas gave the right of Star Wars to Disney. I guess his motivations were manifold, probably centered around the prospects of a quiet money-filled retreat. But it turned out to be exacly what the franchise needed to sublime its meta-reflection about society. 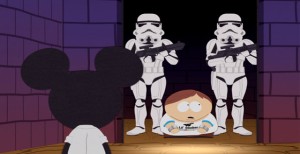 For the franchise was now in the hands of mankind, completely at the mercy of its go-with-the-flow tendencies. And what would Disney do but chose the most comfortable non-risky option to make a shitbuck of munnies: recycle the scenario of the much acclaimed episode 4. Ponder how capitalism is by definition the driving force behing the self-sustaining drive of mankind towards mediocrity through catoring to the lowest common denominator, since it’s about providing people with what they want and keeping them in this safe state of content. The reflection was now de facto moved towards the intertwining relation of society and economy.

This has the very elegant side effect of adding to this new iteration of the repeating loop an extra layer of irony. I’m not even going to touch on the many many issues of the movie, this is not what this is about (take literally any moment of the movie and you’ll be bombarded with inconsistencies, plot holes and dumbing down). The release of SW7 was carried by an unrelenting imperialistic marketing machine, answered by the joyful praise of the masses welcoming the new level of parody of a parody like a new messiah. We’re surrounded by people acclaiming our new capitalistic overlord with a mirth equal only to the one which surrounded the rise to power of Palpatine. Everywhere, they were celebrating being taken advantage of.

If religion used to be the opium of the masses, Star Wars was most certainly its lubricant. How ironic to see that “with thunderous applause” was dying Nietzsche’s ideal of an Ubermensch, he who so proudly proclaimed the death of God. Maybe he should have realized that this also meant the death of an ideal to tend towards.

Which brings us to today. People everywhere praising the new opus with an hypocrisy equal only to the irony of the situation. Do we even dare bring up parallels with the real world political situation? Or the fact that this entertainment is the flagship of a country where evolution is taught in schools? Who knows what the future will hold, if the craze will cease or if people will stop being ecstatic about their exploitation… Will the mass turn its back to this iteration like it did for the prequels? I hope the beauty of this situation soothes the pain of Georges Lucas, because he did create a whole franchise and no matter how much problem it had, it must not be easy seeing your baby thusly butchered. As for me, I’ll try to stay away from any subsequent movie, and try not to suffer too much from the crippling lonelyness that comes with not being on the bandwagon. That being said, I’m super glad that my optimist side found a silver lining in all this. Considering my lifelong quest for irony, you can imagine how happy I am.

3 thoughts on “Postmodern deconstruction strikes back”