This article is the first of a series of 3 about Formal Logic and Religion. This is an introduction to formal logic, which requires no prior knowledge.

Much ink and blood have been spilled because of the similarities and dissimilarities of such and such religion, and I don’t aim at solving this issue at all, but I’d like here to consider a new more joyful perspective on it based on formal logic.

Formal Logic is the pompous name given to the study of the indisputable rules of causality that govern semantics. It is for instance what allows us to consider:

Socrates is a man. All men are mortal.

As you can see, this reasoning is true no matter what and can be abstracted from the boundaries of language. That’s why logicians mostly use symbols. They’d say my two first propositions can be labelled A and B, and that A and B being true implies C being true.

Socrates is mortal. Horses are mortal. This does not imply that Socrates is a horse.

It’s all about considering rigorously the consequences of your premises. For this article, there are two points that are going to be important. The first one is what happens when the premise is false. You know it in popular culture as “When hell freezes over“. In this idiom, since [hell freezes over] is false (it will never happen), it can imply anything, such as:

When hell freezes over, I will turn into a werewolf.

Note that it doesn’t mean that the consequence is necessarily false.

When hell freezes over, I will do the dishes.

But maybe I’ll also do the dishes tomorrow if I’m feeling motivated. The premise will never be realized, so I can say whatever I want as consequence and still be consistent and right. In formal logic, it means that false implies anything.

When hell freezes over, [proposition P].

will be true whatever this proposition P is, no matter how absurd. Further reading.

The second principle that I want to introduce you to is conjunction. It’s a fancy word to say “and”. Our example above is the conjunction of “Socrates is a man” and “All men are mortal”. We’ve done it with two propositions, but our set could be as big as we want, like:

We can even throw in stuff that has nothing to do with it if you want:

[Socrates is a man, All men are mortal, Cats are cute] => Socrates is mortal.

Now comes the twist. Remember the last paragraph? What if my set of premises is contradictory, like:

This is what we meant by the popular phrase “when hell freezes over” (it’s only a contradiction if we assume that hell will never freeze). Well in that case, my set of premises is equivalent to false, and can imply anything as we saw before.

[Hell is always hot, Hell is frozen over] = “When hell freezes over” = FALSE => [I turn into a werewolf, I do the dishes, Socrates is immortal, Socrates is mortal, whatever….]

For a conjunction to be true, all its propositions must be true: A and B and C is true if and only if all of [A,B and C] are true. Therefore, if something is false, you can add anything to it and it is still as false as ever: [FALSE and anything] is equivalent to FALSE.

When hell freezes over and cats are cute, I turn into a werewolf.

[Hell is always hot, Hell is frozen over, Cats are cute] = FALSE => [I turn into a werewolf]

You can add anything to your set of premises, if it contains contradictory propositions, it will still be equivalent to false. A bit like this conversation:

– When hell freezes over, I’m gonna move to Costa Rica and buy a huge mansion and get married and own elephants and fly…

No matter how many propositions you add in there, it’s doomed to always be a non-possible scenario, aka False. 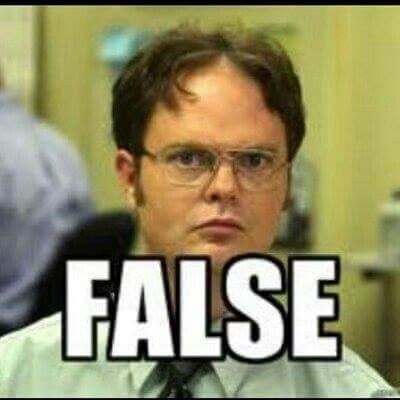 Now that we’ve mastered the basics of formal logic, let’s explore what it means for the real world, and in particular religions. Religions are sets of beliefs, which means the conjunction of a lot of propositions, which guide how followers live their lives. There are way more premises than our examples above, but it is the same kind of thing nonetheless. To take a really small subset as an example, the 10 commandments for instance are a conjunction of 10 premises:

If it’s not clear to you, you can replace the comas in the set above by “and”. It doesn’t have to be orders, it can be statements, like for instance the beginning of the old testament:

[God created heavens and earth, the earth used to be a formless void, God said “let there be light”, …]

That’s all well and good, but remember our point (2): in a set of premises, if there is even one contradiction, the whole set is equivalent to FALSE.

Let’s pretend for one second that there exist an imaginary religion with contradictory principles. We’ll call it “false religion”. For instance, false religion could be based on these simple principles:

[Love your neighbour, Hate the gays]

Hope the contradictory nature of this set of principles is clear: if your neighbor is gay you’re supposed to love them and hate them at the same time. If this is too complex for you, consider the set of principles [everyone is good, gays are bad]. Remember that you can add any other premise you want to this set without changing anything.

Anyway, our imaginary religion’s set of beliefs contains a contradiction!!! It is equivalent to FALSE. Now remember 1): FALSE implies anything and everything. It means that the principles of my newly created religion can be used to imply any proposition whatsoever. For instance:

false religion => You should help people in need

false religion => We should ban the refugees

false religion => Everybody is equal

false religion => This group of people must be eliminated

Therefore, if such a religion existed, it would be a very convenient tool indeed!! It would be a set of principles to govern your life that would justify absolutely anything. Whatever your actions, they would be in keeping with the premises of these ground rules for living.

Let us study an example of such religion. I’m talking about the famed Chewbacca defense. It goes as follows: the set of premises is:

[Chewbacca is a wookie, Chewbacca lives on Endor, only Ewoks live on Endor]

This is a contradiction, and is therefore equivalent to False. Therefore, it can justify anything and everything, including acquitting an obvious culprit for instance.

If Chewbacca lives on Endor, you must acquit.

To sum up, we derived the following logical propositions:

Any religion/set of beliefs/principles that contains at least one contradiction is logically equivalent to false.

All such religions are logically equivalent to each other (and to the Chewbacca defense).

They imply (justify rigorously) by their very nature any and all proposition/behavior.

Such a potential religion would naturally be very comfortable and convenient, and I understand its appeal. It would certainly provide its followers with comfort and self righteousness, all the while allowing and justifying anything logically without any accountability, since the responsibility lies with the set of principles. Just think of the possibilities of what one could do with this!!! Surely this could even impact worldwide history!

I am not recommending anything, but if you are interested in adopting such a system of principles, let me leave you with a recommendation: don’t bother with a lengthy list of premises, and instead adopt Falso* as your belief system, which is logically equivalent and will allow you to prove ANYTHING.

* I am not strictly affiliated or at least remunerated with Estatis in any way.

3 thoughts on “[DT1] Are all religions equivalent?”