UPDATE : If you don’t want my own opinion, you can check out the actual scientific research answering the question : Why MLP ? (check out minute 21 and beyond).

So people often ask me why I love this show (My Little Pony : Friendship Is Magic). Let’s answer, without any particular order, in a few words in order not to bore anypony. Hope it’ll help the newcomers to the Herd take full advantage of this awesome show 8D

They are all very different, they have rich developped personalities, and mostly : they are all pure adorableness and cuteness. Whatever your personnality, there is a (or several) ponies for you ! You can’t help but love them all :

Plus you get extra fun, randomness and awesomeness ! what more can one require ?

Although the plot isn’t very intricate or mindblowing in general, it’s surprisingly good and it doesn’t dumb down anyone. It’s not stupid or anything. It’s kinda like the Disney movies : for EVERYONE, not just kids ^.^ Plus it’s so nice to see for a change a fair word where good deeds are rewarded, people are kind to each other, and everything turns out okay without being idiotic. Pure raw happiness.

The “life lessons” on the overall value of friendship might feel stupid but some of them are worth pondering. Just saying.

I find the show, in general, very funny

Vectorially drawn ponies are beautiful and well animated (and well dubbed). What more can I say ^^

Although I’d admit this point is subject to debate, I find the show pretty awesome and badass. Picture worth a thousand words Because every episode contains at least two references with the potential to be memes, private jokes and macro images, and that’s kinda fun to joke around with those.

You’ll see that the community of Bronies is the best ever. What I meant by this point is how much the bronies extend the show, by giving personalities to background ponies, thereby enriching the plot and giving us good laughs. There are also an impressive number of fanfics, or audiofics, and so on… They even do their own, very awesome and well designed, video games.

Because, wow, the fanarts. DO NOT MISS equestria daily’s wonderful Drawfriend Stuff ❤

More than fanart and fanfictions, bronies do remixes and covers from the amazing soundtrack of Daniel Ingram, and some of them are pretty awesome.

More than that, the show has sparked original creation of all kind of music. Notable examples here and here. I also really liked this one.

The cool part about bronies is that they all will be loving, welcoming and tolerating. It’s a very warm and understanding community, and you will always be fully accepted as you are. Plus they usually have a great culture and sense of humor. The community as a whole often contributes to charity events.

One awesome thing is that over the time Hasbro has come to know, accept and fully embrace the brony community, and now they give us tones of perks, private jokes, easter eggs… The most notable example is the character of Derpy, popularized by 4chan, that they integrated into the show :

As they also write for the brony fandom, the writers now include tons of more or less elaborate references to pop and mostly geek culture :

Plus they tend to be of high quality, and so is the global culture of the community :

Because they know what they are doing, and they tell us all about it on facebook and deviantart (yes, the private joke above about doctor hooves was on purpose <3). Also, Lauren Faust is a goddess ^^ 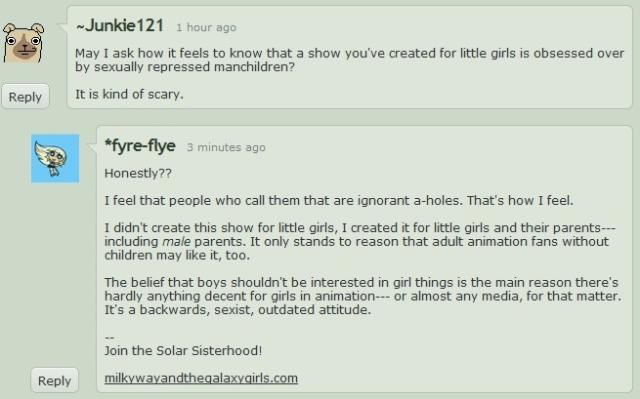 Anyway let’s wrap this up because it’s getting long ^^ I hope to have shown you that there is more to the show that first appears in the girlish opening, and hope to make you want to join the herd. If it’s the case :

I promise you you’re gonna have the best times amongst us 8D.

If not, you know the motto : too bad for you, but

Finally, I hope this helped some new fillies get the best possible experience out of this… hell, let’s say it : amazing community phenomenon ! Don’t hesitate to ask questions and details 8D

I feel obligated to mention that John De Lancie has made a little song about this subject, kinda well done :

More on the subject :

Are bronies changing the definition of masculinity [pbs idea channel]

Rocketboom on My Little Pony and fandom interaction

Because KnowYourMeme is always a good way to explain memes ^^

3 thoughts on “A short guide to MLP : friendship is awesome”